Design a site like this with WordPress.com
Get started
Skip to content
Date: 4 Jul 2019Author: Erica D. 4 Comments 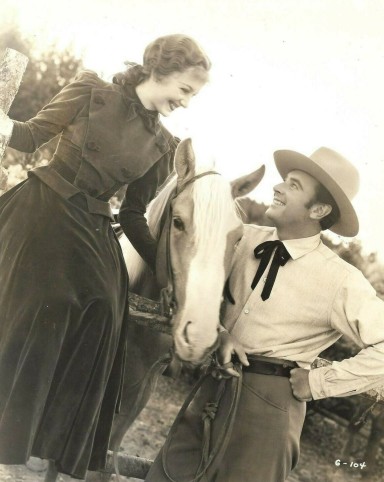 For every precious yellow lump, tons of mud, gravel, and rubble are dumped into the streams that feed the golden wheat empire below. The floods spread, the wheat ranchers protest, but up in the mountains, the monitors lash out their yelling tongues: “Where there is gold, men are going to get it!”

Tenspot is a mushroom mining town sprawling above the great quiet of the Sacramento Valley. It grew to prominence during the various waves of rushes for natural resources that California saw in the mid-to-late 19th century. The current year is 1877 and for several months now, gold in the hills has been extracted almost non-stop by high water pressure, resulting in a huge amount of water with nowhere to go that has flooded the Valley’s abundant wheat fields. This has brought dire straits upon the folks who moved westward to build up their fortune in wheat; their plights ignored by those now becoming filthy rich by gold. One of the parties concerned is the Ferris family which owns a good portion of the land that has been flooded. Headed by Col. Christopher (Claude Rains), a single father to son Lance and daughter Serena (Olivia de Havilland), he fights to find justice for those like him although many feel as if it is a lost cause due to lengthy court proceedings.

One day, an engineer by the name of Jared Whitney (George Brent) arrives in town for business purposes. While exiting his carriage, he bumps into Lance who is heading for the local bar, already quite intoxicated. Jared later also goes there for a drink, eventually coming to Lance’s aid when he is accosted by some of the locals. Grateful for his intervention, Lance invites Jared to his home to meet his father. The Ferris’ live on a very large estate, allowing them ample opportunity to work the land as they see fit and to enjoy living in a beautifully elaborate mansion. While at the house, Jared meets Serena to whom he takes a liking after sharing stories about apples. You see, Jared is originally from Vermont and having worked on his family’s farm, he knows a great deal about that specific fruit. It just so happens that Serena has attained 50 acres of the Ferris land to be dedicated to an orchard, something almost unheard of at that time. She is a novice when it comes to growing Grade A apples but is slowly learning how to tweak her methods, all on her own with the exception of two horses. Serena immediately falls in love with Jared and despite her young age – she is 16 going on 17 – he gradually also falls in love with her. 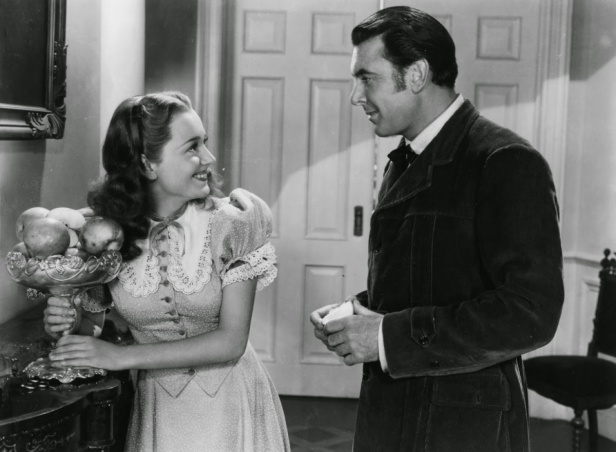 The reason that Jared came to Tenspot was act as superintendent of the Golden Moon Mine excavating site. Apparently the team is behind schedule due to their equipment not working correctly and Jared is there to help make improvements with his expertise. His impact is immediately felt and before long, The Golden Moon becomes one of the best outputting gold sites. This encourages many people to go into the gold industry, including Lance and Col. Christopher’s brother, Ralph, who decide to move to San Francisco for a life with more excitement. Ralph decides to sell his part of the land to a shocked and appalled Col. Chris while Lance tells his father straight out that the life of a farmer is of no interest to him. Broken-hearted, he can now only rejoice in Serena continuing the family tradition. When he learns that she and Jared are serious about one another, Col. Christopher denounces their relationship and warns Jared to stay away from his daughter.

In the meantime, tragedy strikes when the saturated earth gives way underneath the residence of a wheat farmer, killing the man’s wife and young child when the house collapses on top of them. This gives Jared the idea to build a dam that can collect the excess water and save the fields below. He heads to San Francisco to speak with his boss and leaves in such a hurry that he is unable to tell Serena goodbye in-person. Despite a huge price tag to build the dam ($250,000 in 1877 equating to $6.1 million in 2019), his proposal is well received enough to land him a big promotion and an office in the San Francisco office. Jared continues to write to Serena while he is away but Col. Chris hides the letters from her, pretending that Jared has “moved on”.

Will Jared and Serena be able to give their love a chance despite the obstacles? How will Col. Chris fare in his continued fight to stop the miners from flooding the local lands? What will be California next big thing after the gold frenzy has finally gone away?

Historically speaking, this is a very interesting film because it gives a detailed look into the way of life in mining towns as well as the many benefits and drawbacks associated with exploiting natural resources. A voiceover narrator gives us a brief yet concise rundown of why people came flocking to California and what exactly they drew them in. In 1849, the initial California Gold Rush took place and by 1865, the days of gold were over. Those who had already gone west decided that their next venture would be wheat, something that continued to attract people to the state. By 1868, The Great Wheat Empire was in full bloom and was able to flourish for 10 years before news came that gold reserves had been found above Sacramento. This gold was particular, however, as it was located in bedrock which required an extraction through the use of hydraulic mining. No one thought to think of where the excess water would end up and in turn, the wheat fields which were still money makers fell victim to the gold craze.

The title of the film, Gold Is Where You Find It, makes more sense once you have seen the end of the film, which obviously I will not spoil for you, but I believe that one can grasp the meaning of it in a general manner. Essentially, it goes something like this: Gold is considered highly precious in terms of marketplace value and is incomparable to most other worldly goods yet there are other things in life, both tangible and impalpable, which can be perceived as being as worthy as gold. This is mainly a philosophical viewpoint that is highly personal. One man’s garbage could be another man’s gold and vice versa for gold is where you find it. The message that this film sends is one of hope and continued longevity through the eyes of people who think differently from the masses. In this increasingly competitive world, I believe that what is conveyed in this film is still highly relevant and can allow one to take a step back with a more simplistic view of life. 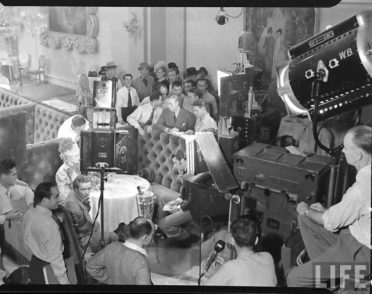 There is a very alluring story that parallels the historical aspect of the film and it is interesting to note that there is not a lot of additional drama dragged out to make things spicier. The characters are generally civilised very realistic exchanges with one another. Despite not being a huge project initially, the addition of Michael Curtiz as director and the attractive cast made it garner a bigger budget. Not only that, it was filmed in Technicolor which was a very deluxe treatment at the time and happened to be only the second time at Warner Bros. that the technique was used. The attention to detail is extremely noticeable at that Golden Moon Mine, giving a would-be exact re-creation of what a mining site would have looked like 60 years earlier. The scenes in San Francisco are also lovely. Finding this film was a happy discovery and it certainly deserves more praise and recognition.

Olivia had only been acting in pictures for about three years when she was cast in this film. It was her third feature directed by Michael Curtiz, the first two being Captain Blood (1935) and The Charge of the Light Brigade (1936), both starring Errol Flynn as her leading man. The Adventures of Robin Hood, again with Curtiz and Flynn, would be released two months after Gold Is Where You Find It with the two projects actually overlapping in production from September to October 1937. Curtiz took the opportunity to use this film as a learning tool when working on Robin Hood as it would be his first film in Technicolor.

Only 21 years old, Olivia easily passed on looking juvenile for her role as Serena Ferris though she was perhaps a little more mature than the average 16-year-old!  She was very sweet and was able to easily duplicate the mannerisms of an independent young woman who was very timid in the matters of the heart. Serena had to face some terrible backlash from certain members of her family who chastised her for acting like a common labourer for her habit of keeping up the orchard. To them, the hard work she is putting in would taint her beauty by dirtying/damaging her body and lessen her appeal towards men. After her brother left and decided to go his own way in life, more pressure was put upon her to continue on the family legacy and for a woman during that period, it meant marrying a respectable man who would be able to follow in Col. Christopher’s footsteps. Her father allowed her to sow her oats during her youth but this nonsense about an orchard would certainly not be able to continue once she fulfilled her obligations as a woman and a daughter. Olivia played the part so naturally and made Serena a very memorable, likeable character. 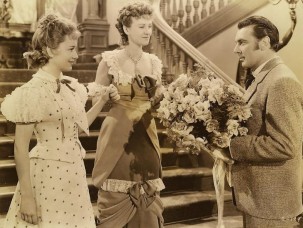 Her chemistry with George Brent is lovely and they very much complimented one another. It makes me eager to see the other two films they did together, 1939’s Wings of the Navy and 1942’s This Is Our Life, especially since George and Olivia’s best friend Bette Davis had carried on a long romantic relationship. It is quite funny to think that Claude Rains was concurrently playing a terrible villain in The Adventures of Robin Hood and an overprotective, gentle farmer in this film. On some days, he was pretending to lock up Maid Marian for potential execution while on other days, he was giving her a warm parental talk. That is the magic of movies! 🙂

"It so happens that I am Miss Angie Dickinson"