* Published specifically for The 5th Wonderful Grace Kelly Blogathon hosted by Virginie at The Wonderful World of Cinema, Emily at The Flapper Dame & Samantha at Musings of a Classic Film Addict *

I have sometimes mentioned that I did not grow up being exposed to Classic Film and that it was a passion which came to me a little later in my adult life. As a matter of fact, I did not see many films before the age of 10 because as a child I lived in rural Virginia. We had a simple turn-dial television set that received just four channels: CBS, ABC, NBC & PBS. Since my television watching time was limited, the most I got to see was morning game shows, early afternoon soap operas, and the weekly airing of Dallas. When I was 12 years old, my mother remarried and we moved to the suburbs of Richmond. It was there that I discovered the joy of cable, particularly movie channels like HBO and Cinemax. One could say that it was a match made in heaven! Despite my initial lack of exposure to film, I have always had a strong sense of pop culture. My mother had a penchant for celebrity gossip with her favourite subjects being Elizabeth Taylor – at one time the wife of Virginia Senator John Warner – and the ill-fated Reynolds-Fisher-Taylor romantic triangle. Another preferred topic of conversation close to home was Grace Kelly. As Grace was an American-born member of European royalty, there was a good amount of build-up around her life as a princess. Everyone was endlessly mesmerised about her fairy tale story and became completely inconsolable when she unexpectedly passed away. Over the years, I have gotten to know Grace as an actress rather than just a public figure. More than being a beautiful movie star and Academy Award winner, Grace has touched me by just being herself – a private person.

Grace Patricia Kelly was born on 12 November 1929 in Philadelphia, Pennsylvania. She grew up in a traditional Irish Catholic family with strict but loving parents and by all accounts had a happy childhood. Her natural, classic beauty made her an ideal model in post-war American while her girl-next-door appeal helped boost her Hollywood career. It also garnered her attention from the opposite sex, allowing her to enjoy many romantic liaisons and bringing her to the attention of a certain Rainier Grimaldi. The unmarried Sovereign Prince of the small European Principality of Monaco, Rainier was actively looking to get married in order to create heirs to the Monégasque throne. Of course, he was also looking for love and companionship so he was thrilled to have hit it off nicely with Grace when they met in May 1955. Although Grace had filmed To Catch a Thief on the French Côte d’Azur almost a year earlier, it is believed that she did not meet Rainier at that “official” time. Whatever the case may be, Grace and Rainier had an understanding of what they wanted relationship-wise from very early on which helped them plan a future together. They were married in April 1956, a little more than a month after production ended on Grace’s last feature film, High Society. 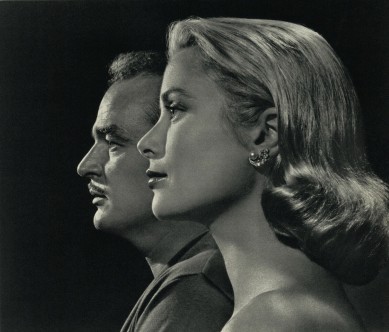 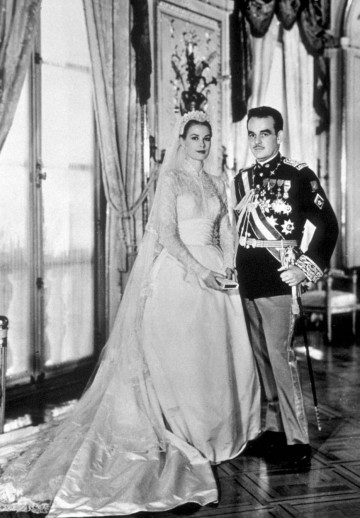 In becoming H.S.H. the Princess of Monaco, Grace’s film career was effectively put to an end as she took on new responsibilities related to her Kingdom and various philanthropic causes. This was not such an easy feat mostly because of the language barrier that she endured during the first several years of her residency in Monaco. Although Grace had studied French in school and was able to basically converse with others, her level was insufficient and she would have to work for years to master the language. In an interview likely to be from 1959*, she is able to communicate well in French with good sentence flow though she does retain a substantial American accent when she speaks. It is hard to say exactly how she evolved in the language because there are so few documentaries and interviews available to the public. In the various English-language interviews she did over the years, Grace’s refined American accent did soften and it is likely that her accent in French also became slightly more neutral. One thing that she was adamant about was speaking English with her children and as a result of that, they still to this day speak with flat, American accents.

Grace on how she learned French: “I just learned through osmosis, I suppose.”

The subject of accents when speaking a foreign language can be rather taboo in some cultures. In my experience, the French prefer when a foreign-born subject speaks their language with the least amount of accent possible; going so far as to congratulate you for having a minimal accent. Having an American accent, for example, while speaking French is not exotic or sexy by any means. The pressure to perform can be very great and I imagine that Grace experienced this herself, even with her high social ranking. It can be even more demoralising when you are actively trying to maintain your mother tongue as it symbolises a link between yourself and your native land. The first time that I heard Grace speak in French, I felt a sort of relief come over me because she reminded me of my own self when I first came to live in France and even in my years as a young mother. In the early 2000s, I was trying to self-teach myself the French language by listening to the radio and by watching re-runs of The Young and the Restless. (Who knew that those CBS soap operas would be so handy?) There were times when I ventured out into the city where we lived, very hesitant to try to communicate verbally because I feared negative reactions. One time I went looking for shortening in a nearby grocery store and my failed attempt to find the translation in French became a joke for the employees working there. It was neither the first nor the last time that I would be laughed at by a native French speaker. There is little doubt in mind that there were times when Grace was humiliated because of mistakes or just wanted to never to speak a word of French again. However, she got through it and somehow, I did as well.

Like Grace, I choose to speak only English with my children in the hopes of them being able to use the language one day either professionally or personally, perhaps even to live in the United States at some point. Although mastering two or more languages is an incredible experience, it is not as easy – or automatic – as most people think. Even Grace found bilingualism to be very difficult especially since her children were naturally inclined to speak French with each other and their father, the Prince. Their English suffered as a result. When this sort of thing happens, you take it very personally because you feel as if you have failed in your duty to transfer your heritage onto your offspring. We know that it is not possible to live in two different countries at one time, particularly when there is a great deal of distance between the two places, but that does not prevent us from trying to create a healthy balance.

“Well, I think I have tried to instil a lot of my own upbringing to their life. We only know from our own experience.”

On a personal level and as evidenced above, I greatly identify with Grace as an American-born woman who gave up life as she knew it to follow her dream in a new and foreign place. Now that I am a mother and my children are growing up, fully integrated in a European system, I am touched by her views on motherhood and how she felt after having been gone from the United States for such a long period of time. In an interview with French-American reporter Pierre Salinger shortly before her death, Grace opened up about her thoughts on having spent 26 years in Europe and how her life had evolved over the years. In the way that Grace answered Salinger’s questions, it seemed that she had not been asked many questions related to who she was as a person post-Hollywood and post-fairytale princess wedding. At times, she was slightly nervous and hesitant while during other moments her facial expressions revealed a sense of happy surprise, as if she was relieved to finally answer questions of a different, less superficial nature. Salinger did dance around the subject of her film career and of the inevitable suggestion that she come out of retirement but thankfully he did not let it linger. By 1982, when the interview took place, Grace had come to terms with what she deemed as her “two separate lives” – one as an actress, one as a princess. Her tenure as Princess of Monaco had lasted over 4 times longer than that as a movie star, a label that she had always struggled to embrace despite loving the craft of acting.

For me, Grace Kelly gave as much as in being Princess Grace of Monaco as she did in being a Hitchcock blonde or an enigmatic beauty. Her cultural and ideological differences helped enrich those around her, opening Monaco up to the international scene and helping the Principality continue to succeed as an independent country. Americans were a more interested (even a slight bit) in the goings-on of Europe because Grace, one of their own, was there. She did lead a life of privilege but she gave back on many levels, both as a dutiful princess and as a loving mother. I understand the sacrifices she made that were never recognised by the press who for such a long time focused only on her glamorous past. She gave up everything she had known since birth in an age when there was no rapid way of communication between Europe and America, when it took 2 weeks to travel by boat. Although she travelled back to the United States as often as she could, she spent the majority of her time in Monaco where she undoubtedly sometimes felt lonely and longed for the familiarity of home. Her bravery is marked by the belief in her marriage vows and her living out the promise she made to her subjects, the Monégasque people. It is also evident in the legacy she left behind with her children and the many future generations to come.

17 thoughts on “Grace Kelly: A Princess from Two Continents”