Design a site like this with WordPress.com
Get started
Skip to content
Date: 28 Dec 2019Author: Erica D. 9 Comments

Though I did not ever really care for musicals, I was pleasantly surprised when TCM France spotlighted them for an entire month. Gene Kelly was their “Star of the Month” and a good number of Vincente Minnelli-directed productions were shown. Perhaps it was the glowing Technicolor that reeled me in, brightening up an unusually cold and wintery February. Maybe it was the handsome appeal of Kelly and the thrilling dance numbers. In any case, what I saw was glorious and opened me up entirely to this genre of Classic Film. When I picked Swing Time to review for this blogathon, I jumped on the opportunity because I knew – despite never having watched the film beforehand – that it would be good fun. I can honestly say that I was not disappointed.

The story is mostly a light-hearted comedy mixed with intermittent song and dance numbers. John “Lucky” Garnett (Fred Astaire), a gambler and dancer in a male troupe who is hastily planned to marry a woman who comes from a wealthy, reputed family. As he is preparing for his upcoming nuptials, his fellow troupe dancers make it so that he misses the wedding in order for Garnett not to leave town and break-up the act. Garnett tries smoothing things over with her fiancée but her father will only allow him to marry his daughter, Margaret, if he can prove his worthiness by earning $25,000. Along with his friend “Pop” (Victor Moore), Garnett catches a train to New York City in search of success. Not long after arriving, they have an encounter with Penny Carroll (Ginger Rogers), a dance instructor at a local studio. Lucky and Penny get to show off their dancing talents which convince the studio’s boss, Mr. Gordon, to set an audition for them at a well-known club. From there, Lucky is in a position to earn the money needed to marry Margaret back home but as the film progresses, he finds himself fighting his growing affection for Penny. Many trials and tribulations occur over the course of the film but in a reassuring fashion, Lucky and Penn end up with a happy ending. 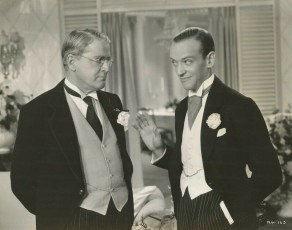 The plot is endearing but not overly complicated, employing good romcom formula: the primary romantic boy/girl leads combined with the funny best friend support role. In this case, there are two best friend types, “Pop” and the character Mabel Anderson, played by Helen Broderick. Their presence adds laughs but also adds substance to the story without being boring or stealing attention away from Lucky and Penny. The casting of the film is praiseworthy and the acting is top-notch. Astaire was a positively charming comedian and this role allowed him to show off his Vaudeville origins by physically clowning around. More will be noted about his dancing a bit further down but it is safe to say that Swing Time contains some of his best dancing ever captured on film. Rogers brings her usual cheeky, sarcastic, tough blonde routine as Penny. She is less standoffish as the film goes on and opens herself up more in this role than I have seen her do in other ones, both prior to and after this film.

Astaire and Rogers made a formidable couple both on and off the dance floor. They had complimentary physical traits andwere each accomplished dancers. Much is said about the comparison of their talents and Rogers is, more than times than none, given the short end of the stick. Admittedly, it does appear that Rogers struggles to keep up with Astaire in some numbers or even that she is there as eye candy in wearing a lovely gown. I have been guilty of having this impression and when I asked my husband his thought after he had watched a number, he said, “You can see that Rogers is trying her best but that she’s clearly not at his level.” Even Gene Kelly went so far as to suggest that when Rogers danced with Astaire, it was the only time that you were paying attention to the man rather than the woman. It is not understood if this remark is simply a jab at Rogers, with whom Kelly did not have the jolliest of relationships, or if it were an ill-formed compliment to Astaire. Whatever the case, it is truthful to say that Rogers’ talent was different from Astaire’s and that she had many obstacles in her way such as: dancing in high heels, having a small shoe size therefore lessening the sound effects of her tapping, and having to don weighty dresses that were sometimes ornated with bothersome decorations. While this is not a fight of women’s lib, we can safely say that Rogers and Astaire were nicely suited for one another and that they both demonstrated equal but differing talent. 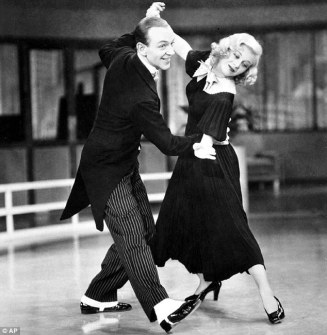 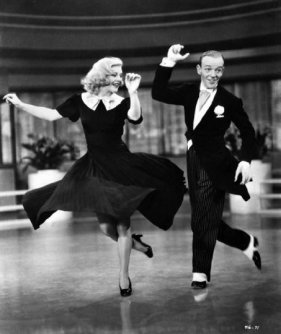 There is a particular musical number called “Bojangles of Harlem” in which Astaire pays tribute to an African-American tap dancer called Bill “Bojangles” Robinson. Astaire appears dressed as Robinson and also, nowadays considered extremely controversial and offensive, in blackface. Some critics and moviegoers label this dance sequence as racist but at the time it was conceived and filmed, racism was not an underlying factor and Astaire himself wanted to render homage to someone he considered an idol. 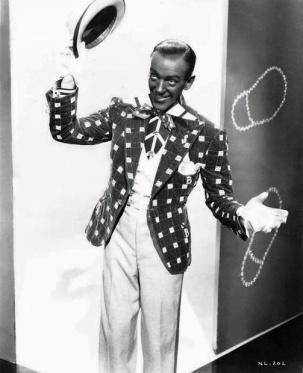 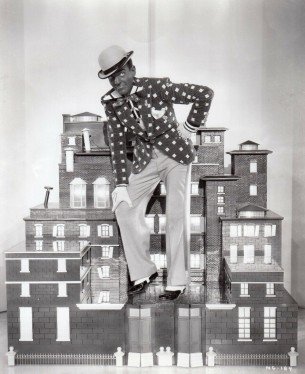 Swing Time marks the 5th on-screen collaboration of Fred Astaire and Ginger Rogers. Their coupling as a dancing duo had been extremely successful and popular with moviegoers though by the time this film was released in 1936, their stars were already on the decline, a mere 3 years after their first film together. The pinnacle of the Astaire-Rogers partnership is undoubtedly the 1935 film Top Hat in terms of recognition and box office receipts. It seems that Swing Time’s reputation has spurted in recent years largely in part to the Hermes Pan & Co. Choreographed dance sequences. It is also the only Astaire-Rogers film that has been chosen, at least thus far in time, for preservation in the U.S. National Film Registry by the Library of Congress. Interestingly enough, Swing Time suffered from a “premature falling off in box-office attendance” (pg. 227) after its premiere and, as Fred Astaire says himself in his autobiography Steps in Time, “Some critics referred to it as the best of all our films. I knew it wasn’t, but that’s how strong the old machine was – we could still do no wrong” (pg. 223) There was at least one critic bold enough to speak out and publish a review of the film under the title ‘The Singing and Dancing Limit’; Astaire himself could not blame the critic in question for his lack of enthusiasm at yet another Astaire-Rogers musical. 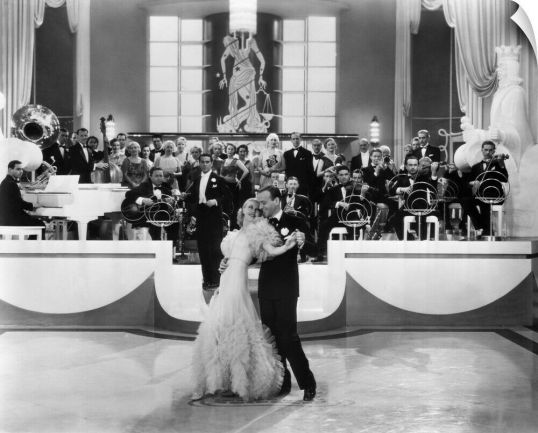 Overall, Swing Time is indeed a delightful timepiece in American cinematic history particularly since it was filmed in between the debut of talkies and the Second World War which saw a boom in both audience size and number of films being made. It also captures mid-1930s life in unique ways. Like many movies I have seen, I found certain aspects of the film to be special but I failed to see any stand-out moments aside from the usual show-stopping Fred Astaire dance sequences. I respect its inclusion as a new entry to the AFI 100 Greatest Films list though I must admit to be slightly baffled at it being chosen because this is not one of the best films that I have seen, certainly not in the musical comedy genre. In any case, it is good to see the film receive such a distinction and hopefully it will allow others to make a pleasant discovery. It is my opinion that the film ultimately will not remain a long-term selection but while it is here, why not celebrate it? After all, “This is a fine romance!”

"It so happens that I am Miss Angie Dickinson"